Chairman of the Council

The Chairman of the Council is the council's civic head and the first citizen of the New Forest. The current chairman is Cllr Derek Tipp. 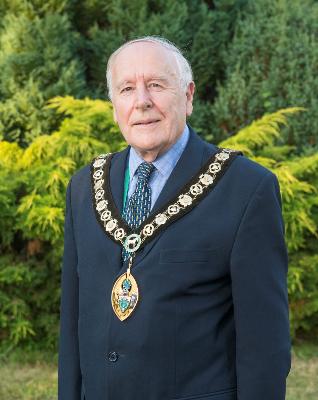 Derek lived his early years at Barton-on-Sea. At aged 8 the family moved to Highcliffe where his father was the proprietor of Highcliffe Garage for many years. He attended Brockenhurst Grammar School and then went on to obtain a degree in chemistry.

Derek's first employment was as a research chemist in a research laboratory in Totton on the former Burt Boulton and Hayward site. When the facility closed, he became a science teacher and taught in secondary schools in Southampton for many years.

Following this, Derek and his wife, Andrea, ran their own successful property company. When this was sold, he stood as a candidate for New Forest District Council in 1999 and has remained a councillor since then. He is also a governor at Bartley Junior School. Derek and Andrea have lived at Netley Marsh for the past thirty years. They have three grown-up sons who all live in the New Forest area and six grandsons and one granddaughter.

The role of the Chairman

District councils are required by law to elect a chairman each year by all members of the council. The Chairman of the Council will not necessarily be a member of the majority political group on the council. As the chair of Full Council meetings, he or she is expected to be completely impartial in this role.

As the council's civic head, the Chairman's duties include:

The Vice-Chairman can deputise for the Chairman and performs similar duties.

Find out more about the Chairman's engagements.

The Chairman will be supporting Oakhaven Hospice during his year in office.